March was full of interesting reads from overachievers to diets to the memoir of one of the most hilarious personalities on Twitter.

In The Overachievers: The Secret Lives of Driven Kids, Alexandra Robbins presents a bleak glimpse into the life of the type A high school student. By way of examining nearly a year and a half in the life of several high school students in her alma mater in Bethesda, Maryland, she highlights problems within high school systems, college admissions, and the industries that thrive due to desperation to get into a top school.

Though this book is nearly two decades old, if Operation Varsity Blues taught us anything, it is that the problems Robbins presents still exist. If you are parent to a child, no matter how young, read this book. Educating and arming oneself with the tools she suggests will benefit the mental health for your little one, and to be honest, for the mental health of yourself.

I bought this audiobook and the author himself narrates it. How Do I Remember This: Unfortunately True Stories by Danny Pelligrino is laugh out loud funny. There are several stories that I can recount, specifically the vacation and getting thrown off the back of a golf cart, going Dutch on a date, and encouraging the reader to finally take my friend-cation.

I found myself looking forward to indulging in a few chapters in the evening once my husband took over Pamper Pirate duties. Buy it on audiobook and thank me later.

The latest memoir of gay men from the midwest making it in New York cannon, Too Much is Never Enough: A Memoir of Fumbling Towards Adulthood by Andrew Rannells reminded me of Andy Cohen’s and Dave Holmes’ memoirs. Maybe more of Holmes, as I find both him and Rannells infinitely more likeable than Cohen.

Rannells chronicles growing up Catholic (another parallel to Holmes) while pursuing work in the theatre. He discusses his eventual struggles getting repeatedly knocked down pursuing work on Broadway, including a rather harsh rejection from Rosie O’Donnel. He concludes his book when he scored the role of Fender in the Broadway production of hairspray. Rannells does not delve into after he made his film and television debut, so if you want to read about his time working on Girls, you won’t get it on this book.

Out of sheer curiosity of Gwyneth Paltrow’s diet, I purchased I’ll Have What She’s Having: My Adventures in Celebrity Dieting by Rebecca Harrington. Harrington spends about ten pages each delving into the eating habits of assorted celebrities from the past and present.

Her book does not expel toxic advice though! Harrington comes from the perspective of an everywomen. She shares lessons from all of the diets and ultimately acknowledges the harm diets can do.

I still want to buy Gwen’s cookbooks though. 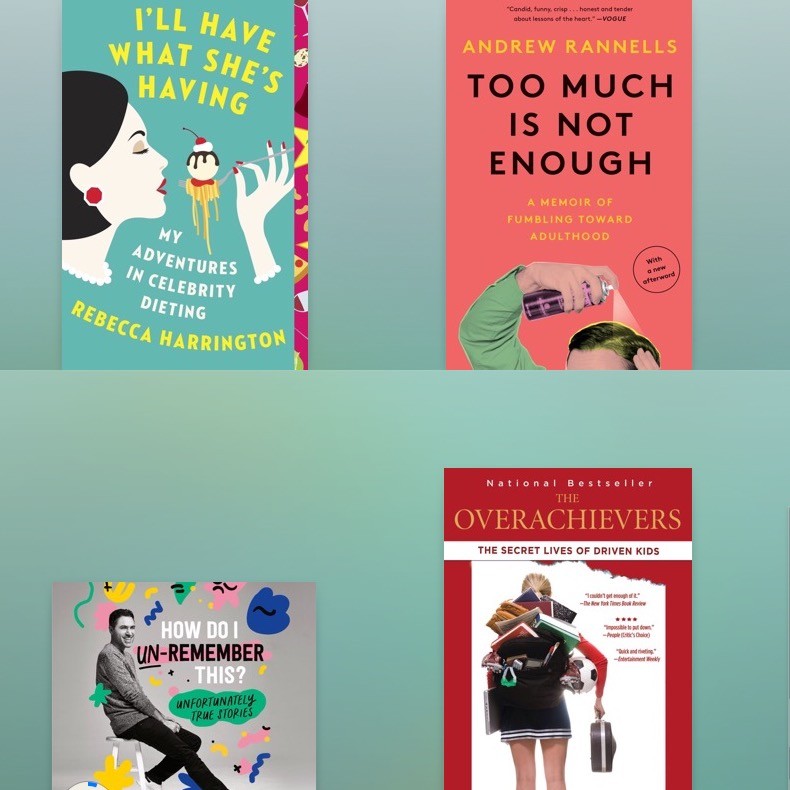