There are two topics of which I am an authority. The first being sourcing apparel for the taller than average female (and why you are likely on Lucindervention right now, duh) and the second being financing higher education. Though I reduced the need and eliminated all of my student loans, this is something I feel second-hand anxiety about from friends, family, and folks who trend on Twitter. While I am indifferent on forgiving principle amount of loans, I fully support permanent suspension of student loan interest. Can you imagine the positive effect it would have on the United States economy?

I am going to spill every secret I have on how I gathered funding for my education. Yes, they were previously my secrets because I did not care to lose out of funding to a classmate. It is a dog eat dog world out there. Full disclosure: my parents paid off the delta that I could not finance via assistantships and scholarships, but that amount was relatively minimal. I most definitely received more money from the third party sources than my student loans and thereby my parents.

Admittedly I could have done better with financing undergrad, but I ended up with a very minor tuition bill after transferring from an in-state private school to an in-state public school. I made the decision to transfer after coming to the conclusion that I did not know where my future was heading and forty thousand dollars a year, even with a generous scholarship, felt like an uncomfortable gamble.

I was able to pay off my undergraduate student loan balance at graduation because I worked a full time retail job during my junior and senior years. Though it was a sacrifice, the experience of balancing school and work ultimately prepared me for graduate school and eventually working motherhood as I would balance coursework with an internship or job every semester.

be critical when it comes to financial aid counselors

First I celebrated my acceptance into the University of Maryland’s graduate program for historic preservation. After a week on spring break, I started getting real about tuition. I made an appointment to meet with a UMd financial aid counselor while visiting the school for the Maryland School of Architecture, Planning, and Preservation spring open house.

In not so many words, the UMd financial aid counselor communicated that I inexplicably would not be eligible for a federal loan in the amount of the out-of-state tuition. It did not help that the same day, I was told that I was not getting a graduate assistantship through the historic preservation program. It was a bleak rest of the trip, but I was adamant about attending the program.

I had already submitted my FAFSA, so at the beginning of the summer I should not have been so surprised when I ended up getting a government loan for my first semester, which covered tuition and board.

Everything that the financial aid officer said was wrong and could have cost me. Read on…

just say no to private loans

Receiving word that I was approved for a student loan did not happen before I nearly took out a private loan. Upon receiving the check (and who sends the check to the student directly, rather that to the institution, I ask?!), I reviewed the payment schedule. The interest had me paying back four hundred percent on the loan value.

I was not up for that and knew I would find another way. As you read above, I would not go on to need the private loan but not before the lender took back the uncashed check and cancelled the loan, without penalty.

The financial aid counselor also did not clue me in to out-of-state reciprocity for states which do not have the desired program, despite me mentioning that I was visiting from Mississippi, a state without a graduate historic preservation program. I only learned about this tool until midway through my first semester from a classmate from nearly Springfield, Virginia.

Essentially, tuition reciprocity programs allow students to attend colleges or universities in a different state than the one in which they reside for in-state tuition. Reciprocity typically applies to public schools only and sometimes it only applies to those from the same region as the school.

graduate school: where you get paid to go to school

It was not until I started my second Master’s degree that I really hit paydirt when it came to gathering money for tuition.

Though I was not awarded a graduate assistantship my first semester in the historic preservation program, I was forward thinking enough to identify the students who were graduating at the end of my first semester. I then asked around about which ones had funding. While manning the University of Maryland table with the historic preservation program director at the National Trust for Historic Preservation conference in October of 2008, I mentioned knowing that James (his name was James, I will never forget) was graduating in December. I inquired whether he had funding for the spring semester. It turned out he did. And with that, I got my second semester forward funded.

Academic departments are not the only options for graduate assistantships. Prior to that October day, I distinctively recall jumping onto the University of Maryland human resources website every Friday at noon because that was when the new graduate assistant positions were listed. These are frequently for student services office.

I cannot articulate this enough. Not only is a graduate assistantship for tuition remission and a stipend, but any remaining tuition is charged at an in-state rate. This makes nearly as much of an impact as the free tuition. (Also, if you are awarded an assistantship, this makes pursuing in-state reciprocity moot.)

While I was in school, I was able to arrange my schedules in either entirely night classes or between two days. I was going to school at a campus inside the Beltway, which offers a plethora of opportunities across public, private, and nonprofit sectors. There was not a semester or summer where I was in the city and did not have a paid internship or job applicable to my coursework or degrees.

Building my resume while making money and lessening my need for student loans for living expenses was a win on all fronts.

In the words of Rihanna, this is what you came for. Just yesterday, my husband and I were walking from CityCenter to our hotel where I spotted the headquarters of an organization that gave me money for school. (It sits caddy corner to the office for the aforementioned job where I worked during graduate school while defraying my need to take out loans for living expenses.)

It is shocking how many scholarships are available. Based on how the ease with which I tapped into the money, I suspect many of the scholarships go unawarded. These, however, are not scholarships native to universities.

I am talking about third party scholarships. Nonprofits and trade organizations in every industry have thousands of dollars to give away for educational purposes. If you are unaware of where to start looking, these nonprofits and trade organizations are frequently the ones that put on huge annual conferences. Start there and follow up with a Google deep dive into every search term for your industry and “scholarship”.

If you have a parent or grandparent who is a veteran of the military, there are organizations that offer funding to offspring and great-offspring. My grandfather sent me an application for the Fleet Reserve Association scholarships. I forgot I submitted the application until one morning when I was awoken in my apartment in DC from the nearby FRA headquarters in Alexandria, Virginia with word that I was getting selected. I then proceeded to call my grandfather on the west coast, where it was five am.

I did not start pursuing these opportunities until I was in my second graduate degree. I wish I had started mining for third party scholarship money sooner. As soon as I did, these organizations made it rain. I think it helped that I was a woman applying for these opportunities as I was playing the minority card. (I work in construction now, relax. In fact, in the words or Hillary, deal me in.)

I will sign off with the organizations and scholarships who, along with graduate assistantships in the historic preservation program and the Visual Resources Center at the University of Maryland School of Architecture, Planning, and Preservation, paid a substantial portion of my way through my Master’s of Real Estate tuition. I will be forever grateful to them for minimizing my educational debt.

And hey! If you want or need assistance getting started, shoot me an email at lu@lucindervention.com and I will help you dig in and find your paydirt. Let’s eliminate your need for student loans. 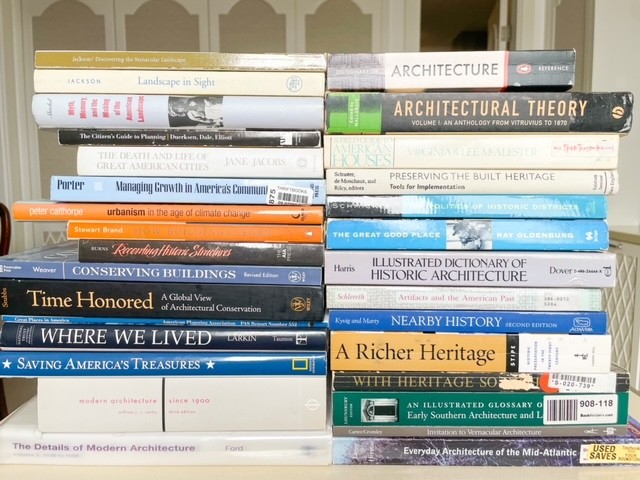